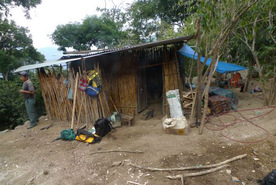 A typical rural Guatemalan hut. This is one of the worst, made with tin roofing and what appears to be wood of some kind.
On average, there are an estimated 7,000 street children in Guatemala. About 50% of the population lives below the poverty line, and many of them are homeless. On average, there are about 6 people per one house.


According to an article from Inspire magazine, about one child is abandoned every four days in Guatemala. Many of these children are newborns. The reason for this is that the family simply cannot afford to keep another child, due to the number of large families and overwhelming poverty rate in the country.


Antigua is known for its homeless and abandoned street children. A large international presence due to tourism, language students and businessmen, many people migrate to Antigua from their small Indian villages. Many of the homeless people, mostly adolescents and children, have substance abuse problems such as: alcoholism, glue sniffing and crack/cocaine addictions. The homeless people in Antigua sleep under benches and covered archways. You will find many people however in trash dumps. They search here for food and a place to sleep.


Home Life and Home Structure:
You will not find, spacious, large homes in Guatemala like you find in the United States. Many people live in two bedroom huts with dirt floors and tin roofs. Sanitation amongst the poorer residents is not always a priority, and because of this many people have respiratory ailments, also connected with poor nutrition. Many of the nations rural houses lack electricity and water. Most rural units also have serious structural issues. About half the houses are made with concrete blocks. Another 25% is made with Adobe. Metal sheeting is a very common material for roofs. Overcrowding is prevalent due to large families.


Guatemalans are very tight-knit communities. Traditionally, the family consists of a mother, father and their children, but occasionally extended family, servants or orphans may be living in the house as well. This is common among Ladinos. However, in the Amerindian, the extended family forms the basis of the traditional household. Recently married Amerindian couples will usually live with the husband's parents.


"No place to call home." National Catholic Reporter 20 Dec. 2013: 13. Student Resources in Context. Web. 10 Dec. 2014
This article is about a Guatemalan woman named Gloria who lost everything when her husband died. She and her children are now homeless, living in the neighbors' shed. Everyday they go around the neighborhood begging for food, and often come up empty-handed. Most days, they live off of just boiling water. Gloria believes that God has a plan for her and her children and she prays to God everyday that she will be able to provide food, and maybe a home of their own, for herself and her family.